Protocol is an installation in which two computers are entangled in an endless conversation, transmitting self generated colour data back-and-forth over human speech frequencies. In doing so, not only do they open up the data stream for humans to experience, but the human also acquires the ability to produce data that then becomes part of the established data stream.

The installation has been made for the exhibition The Human Err(or) at Mänttän Kuvataideviikot (Mänttä, Finland). The exhibition theme centers around the similarities and discrepancies between humans and computers in an ever increasing digital world. Mänttä kuvataideviikot is Finlands biggest contemporary art summer exhibition.

The installation is composed of two LED screens (96x126cm) which use Raspberry Pi’s as their drivers. Custom C++ code runs all logic, and hardware pulsing is handled by active logic-level converters. These Raspberry Pi’s each connect to a Teensy microcontroller embedded onto a custom PCB. The Raspberry Pi’s function as image-generators and run a ‘colour-serving’ API. The Teensy microcontrollers are at the heart of the actual logics of the installation. They query the Raspberry Pi for further data and then decode the RGB colour data into audible frequencies between 85 and 450 hertz. Before a beep occurs, the two Teensy microcontrollers perform checks as to make sure all parts of the installation are ready to send and receive. The receiving side then ‘catches’ the frequency (which is produced by the other Teensy running in sender mode) and encodes it back into a perceived RGB colour data which is then send to the connected Raspberry Pi after which the result can be seen on the screens. When a full picture is transmitted, the roles switch. Sender becomes receiver and vice versa. 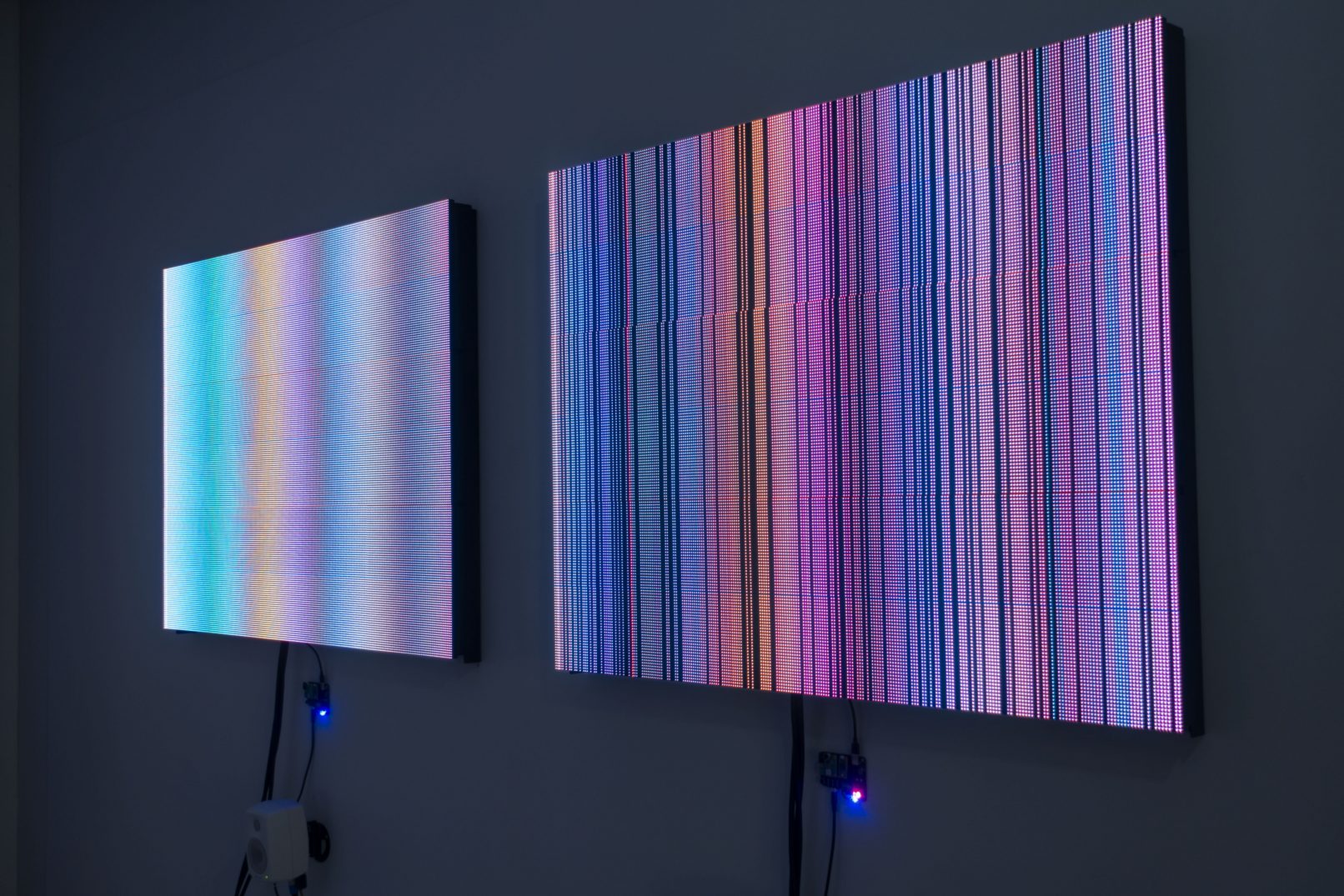 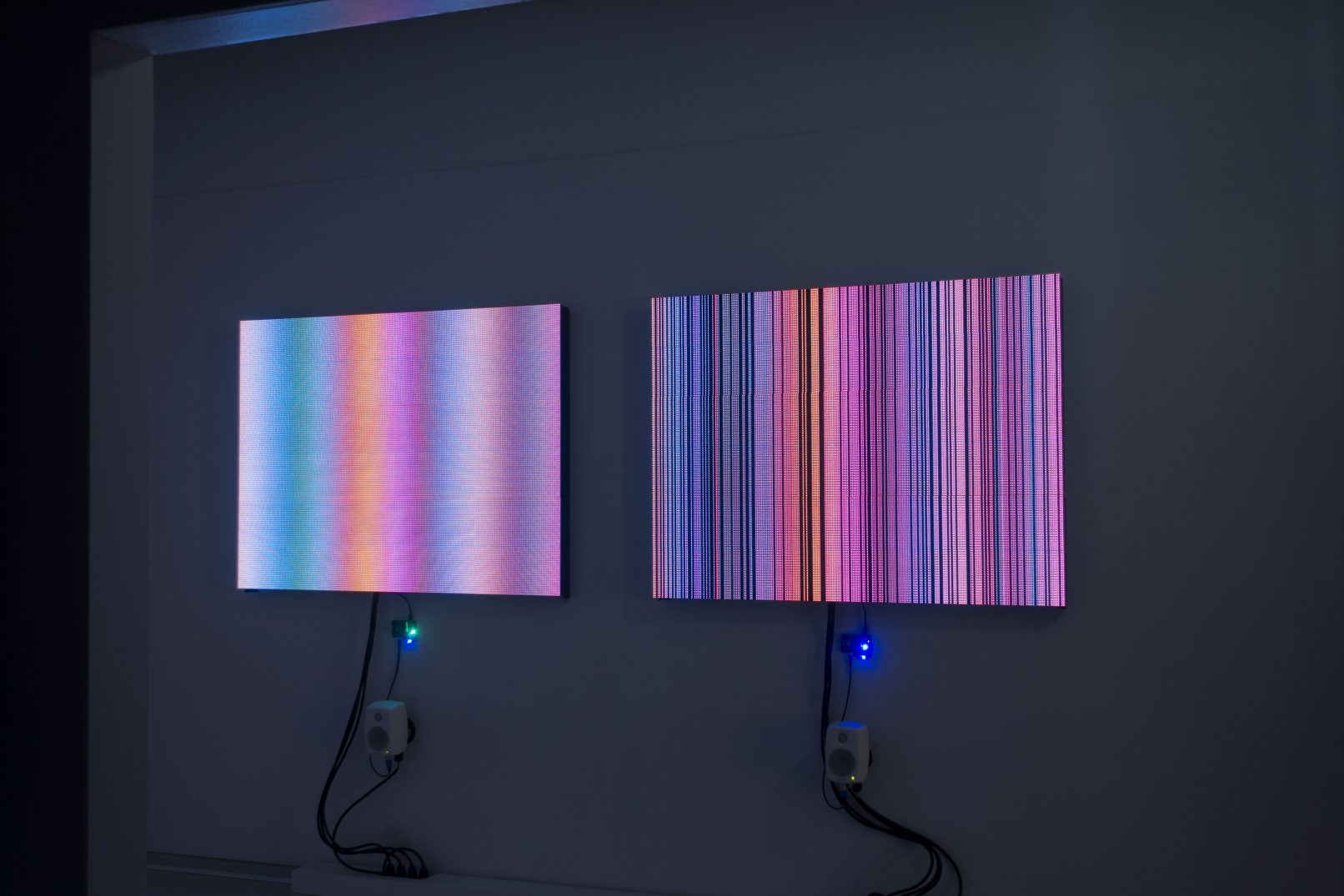 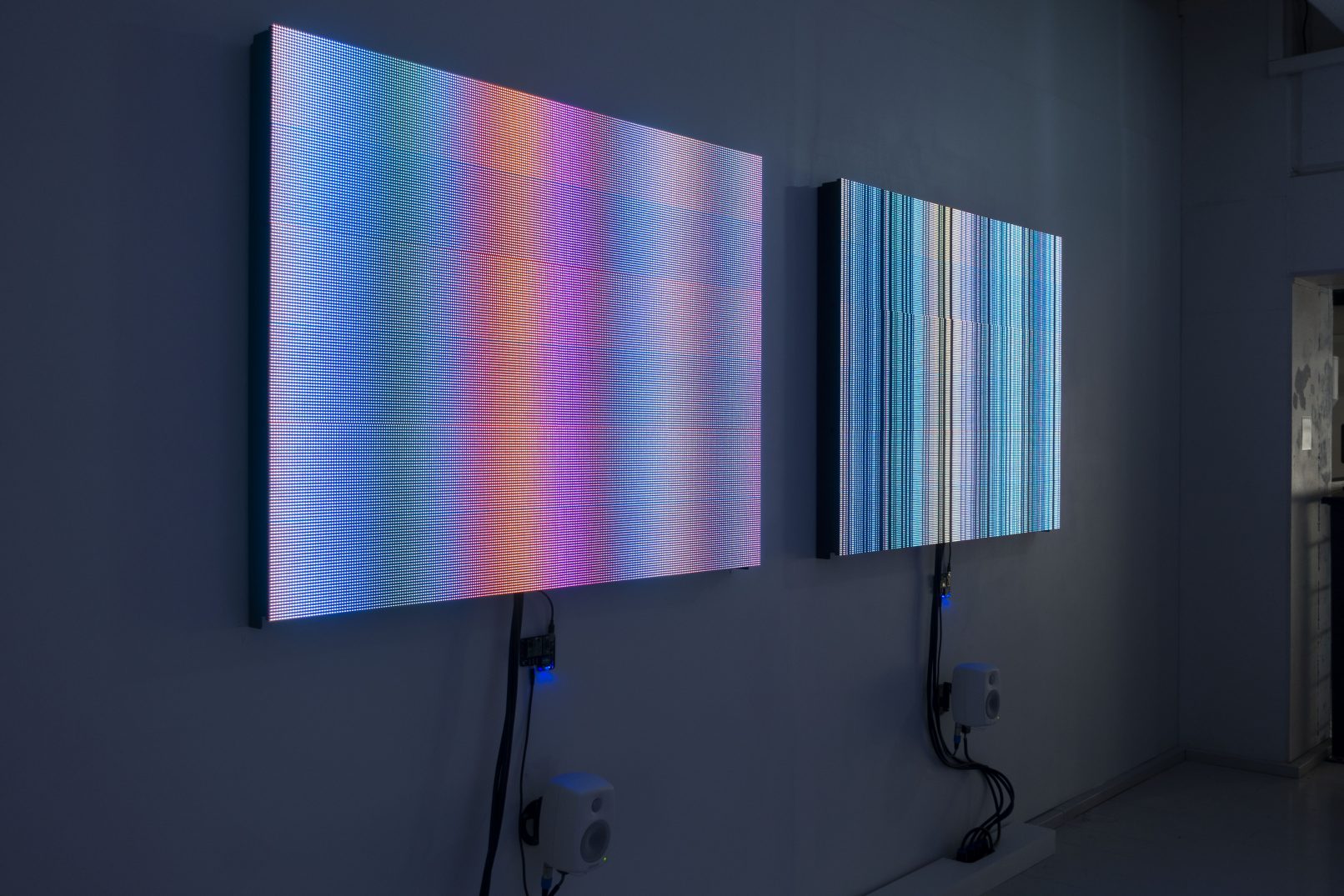 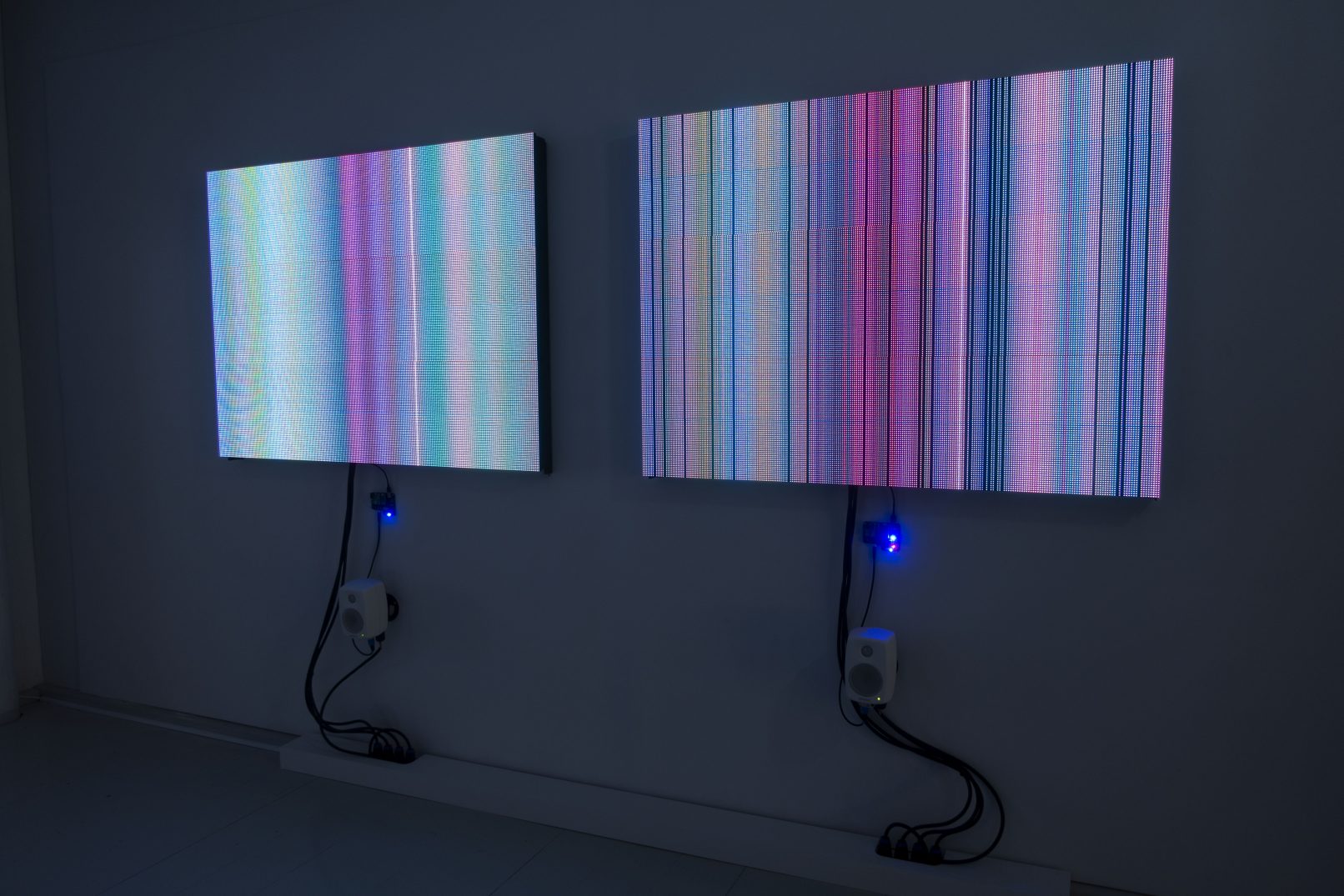 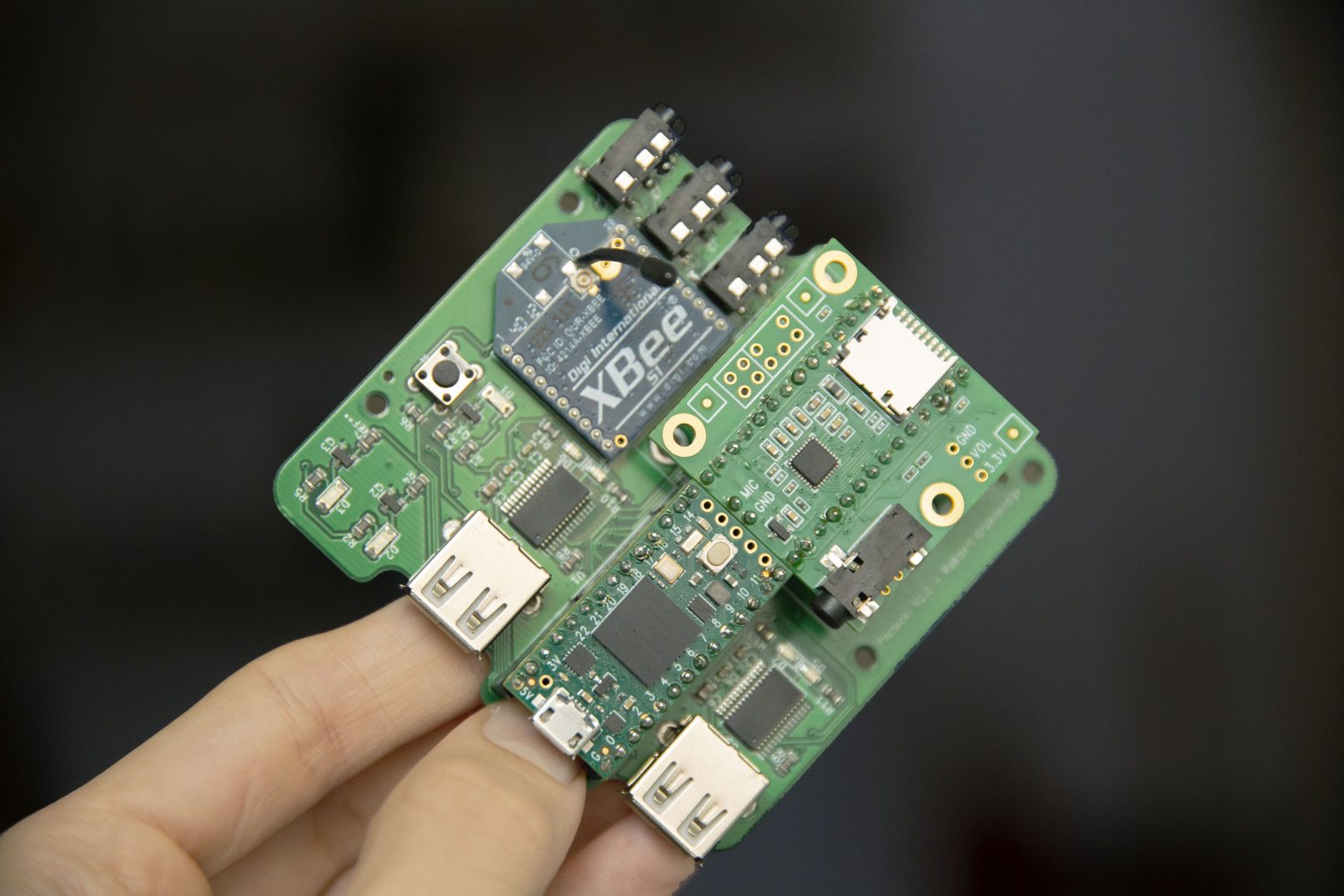